When Hurricane Matthew slammed into southern Haiti last year, the storm took almost 1,000 lives, caused considerable damage to dwellings and wiped out a large percentage of the country’s crops. Delivering disaster aid to these areas from the main operations centers of NGOs working in Haiti was almost impossible. Roads were washed out, local authorities hindered shipments, and most of the NGOs were focused on the main urban centers, leaving the southern communities to fend for…

A blog about IRG by an IRG Reserve boat

This blog is published by IRG Reserve S/V JODA, Danielle Breteau is a humourous blogger and put together a fun article while becoming an IRG member and aiding one of our missions to Haiti after Hurricane Matthew.

Click here to see the blog, and there is a video and an interview with Captain Ray!

Thunderbird 5, IRG's flagship 97-foot steel ketch, was securely anchored in Eleuthera, Bahamas awaiting engine parts and new crew to continue her voyage to Haiti on a humanitarian aid mission. On January 23rd a freak storm blew through Eleuthera that was forecast at max winds 40 knots. Thunderbird 5 had two anchors out since the engine was out of commission. Unfortunately unexpectedly high winds locally clocked at 75 knots overcame the anchorage in a major squall and the chain on the…

Our first aid boat IRG S/V Tandemeer arrived 2 days ago, now our second vessel IRG Reserve S/V Bamba Maru departing from Luperon, Dominican Republic loaded with much-needed supplies for Ile a Vache, the island on the Haitian south coast, after much destruction by a direct hit by Hurricane Matthew. They…

An IRG member Rene Steinhauer is a part of Remote Air Medical. I asked RAM if they could help Haiti and in particular the south coast, this is the reply from their Founder and President Stan Brock: "Thanks for the update Ray. We are dispatching our Cessna 206 as soon as flying weather permits later this week to Port au Prince. From there it can service Les Cayes and Jeremie if those strips are usable.…

When on disaster relief standby in St. Lucia late last year, a vicious storm killed over 30 people on the beautiful island of Dominica and wiped out roads and bridges, many buildings and there was a real emergency. Our 97' boat ran two missions there with water, medical supplies and we even transported military help. The Red Cross and Rotary Club, and even the largest Caribbean wireless network company and supermarkets got involved and we became part of the government of St. Lucia's official…

All cruisers in the Eastern Caribbean share a fear of named storms, whether directly in their path or not. Even when we are safe, as travelers we most likely know people in harm’s way. My husband, Mike, and I, although safely…

Looking for a dinghy in Acapulco

International Rescue Group's disaster relief boat in Acapulco on the Mexico Pacific Station is being re-fitted by Captain Lou Rodriguez, and her old dinghy is worn out. Does anyone in the area have a dinghy they could donate, or at a reasonable price? Could use an outboard too. If you're a US citizen, we can give a tax…

Getting ready to work in the cargo hold

Disposable suit a little too small for me! JAN-16: Captain Sequoia and his crew brought a large cargo of supplies to Deschapelles: books for the new library, musical instruments for the band, tennis racquets, balls and strings for the tennis program... we played tennis with them each morning, ping pong at night and attended the grand opening dedication ceremony of the new library.…

A message from our coordinator on storm-hit Dominica

Hi Ray, thanks for your email with all your news and photos. I've been following your travels on FB. Now Dominica has the Bailey bridges in place we are more or less back to normal on our side of the island. Villages are still without water, and people without homes, but I guess you know that story once the aid slows down the impetus to restore slows too!

Bethany stayed with us for nearly a month in the end, as the boat from SXM was late arriving. She 's now in Jamaica at the…
Continue

IRG has been invited by Commodore Escrich of the Hemmingway Yacht Club, Havana he says "I would ...like to have the honor to personally greet the members of the International Rescue Group arriving in Hemingway Marina, and invite them to join the big family of members of this Cuban nautical institution".

Below is from Marilyn who resides in Prtsmouth, Dominica and who has supported two IRG affiliated boats to get supplies into the country with help from the local Rotary Club:

It was great to meet Mike and Jennifer of (S/V) Three Sheets - they arrived early on Friday morning, after some bad weather off St Lucia set them back a day.  Such a lovely couple and I hope I can meet up with them later in the season when they return here.
It was nice to get the supplies,…
Continue 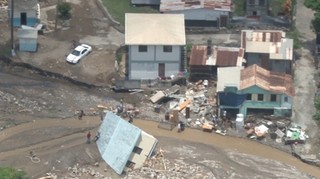 Read news from the devastation…

How to raise funds within the IRG infrastructure

Here are ideas to help our supporters fundraise. I can give some examples of very successful fundraising by our members, including Melissa Fleming who did most of the below and within 24 hours raised US $1500 for our second Haiti mission earlier this year! If you have any other ideas, please do post them as comments to this blog.

I'm posting this message and photos (below) from the Caribbean Windward Islands. This is where we've ended up after IRG (International Rescue Group) has completed our largest operation so far - two boats plus partner vessels have delivered much needed supplies and help to children's safe-houses and clinics to the poorest country in the western hemisphere, Haiti. We have also distributed a lot of recycled sails to…
Continue

The World ARC fleet of sailboats has just crossed their outbound track and completed their circumnavigation today in St. Lucia. I'm here in Rodney Bay and 17 of the yachts arrived this afternoon, I was out in the dinghy to greet them as they all cruised past my boat which is anchored outside the marina.

April 10th 2015: I'm Ray. Captain Ray to my volunteer crews who join me from time to time. Today I met a single-handed sailor who has been sailing his 80 year old wooden Bristol Channel Cutter out of Wales and after years is still sailing by himself. This morning he was bunkering some fuel and water and I waved him off to Antigua where he is going to participate in the classics yacht races. He's been sailing his boat around the Caribbean alone for years and appeared to be very happy about…

An epic dinghy ride of 245 miles down the ICW.

Last Saturday night I arranged a tow from someone who was driving from Philadelphia to Florida, over 1,100 miles, to get a much-needed donated 14' RIB and 40hp outboard motor to our 97' gaff-rigged ketch in Hollywood, FL. unfortunately by Sunday evening, we had blown and replaced one trailer tyre, a wheel bearing which we fixed, then found the other bearing was about ready to burn out. So 245 miles short of our destination, my lift was on a schedule elsewhere, so we managed to limp to…