April 6th 2014: We are northwest of the southern peninsula of Haiti lying within radar range south of Guantanamo Bay, Cuba and drifting in the current in the direction of Port-au-Prince at less than a knot. They call this the "Windward Passage" and the irony isn't lost on us, as the only wind we can feel is when our boat rolls, even the flies that came with us from our last landfall seem to be too hot and lazy to dodge my swatter. We've had the sails up all night in the hope wind will return but only suffered the interminable flogging of sheeted-in sails, split wooden balls on the deck, luff ties coming undone and the paint scraping off the masts and flaking onto the deck. So we took down the sails and reluctantly fired up our engine to motor north and stabilize the boat while cooking breakfast. During the night we had a radar target from Cuba steaming directly at us at 20 knots only to turn 180 degrees away just 2 miles distant - after we turned on our powerful deck lights to show that we are just an inoffensive sailboat...

We really don't want to run our big 450 horsepower Volvo main engine because it slurps four gallons of diesel fuel per hour, that's over 100 gallons in a day. As we only have enough left in our tanks to maneuver us into port and a little reserve for the generator, motor-sailing is a luxury and special treat for the crew who have been quiet, exhausted and perhaps a little morose since we departed from our island paradise south of the Haitiian mainland. It's hard to sleep when you are being rolled out of your bunk every minute or two.

We receive a call by VHF radio emergency channel 16 and it's the US Coast Guard hailing. Our first thought is that we are in a sensitive area and are likely to be boarded, but it turns out there is another yacht just 10 miles south of us who are the target of the coasties' investigation, so we serenely drift on undisturbed, watching our own distorted reflection in the sea. We guess an old-fashioned Dutch-built 97 foot gaff-rigged ketch doesn't say "drug smuggler" to the maritime authorities.

We are on the way home to our east coast base in Miami, having fulfilled our mission of delivering humanitarian aid supplies and developing relationships with other NGOs there. Since the 2010 earthquake, Haiti has suffered a number of indignities leaving the people living in a state of broken or little infrastructure including roads, electricity or clean water and little state education or healthcare and we believe we can help other charities as partners. We know we're inexperienced in Haiti, but by collaborating with other organizations they can tell us what they really need so we can we amplify our effectiveness. 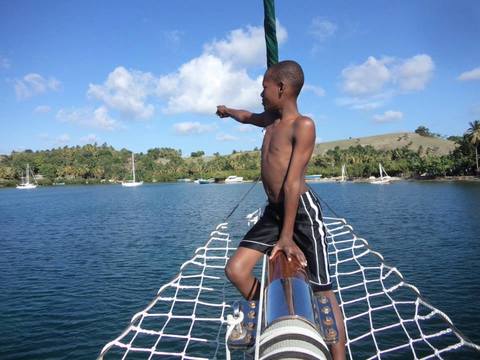 Two days ago we invited a Transitional Safehouse based in nearby Les Cayes - offering protection and healing of children victimized by abuse, neglect, exploitation & homelessness - to spend an afternoon aboard our donated luxury yacht Thunderbird 5. We can't take the kids sailing because there's little wind, but sitting at anchor is very pleasant in our gorgeous bay and offers the chance to swim around our beautiful boat and explore the boat. One of the boys, Job, is pictured on Thunderbird 5's bowsprit netting. We didn't know whether it's right to display such opulence as the children clamber aboard and stand staring on our expansive teak deck, but the person who runs the safehouse turned out to be an inspiration who left us all in awe. At just 19 years old, Morgan Wienberg traveled from Canada to help after the 2010 earthquake and simply stayed there while finding a home forhopeless and, in many cases, abused street kids, founding Little Footprints, Big Steps. We met in Port-au-Prince; softly spoken in both English and Creole, she commands the respect of everyone instantly. She walks the potentially dangerous streets by herself, her only personal security lies in the local people knowing who she is; they are her protection.

We met one of her boys, called Ysaac, who has a large tumor on the right side of his face and she has managed to get him a passport and a hospital in Miami to operate on him soon, though there is no guarantee yet that it isn't malignant. She recently found another terribly malnourished child in the streets but was too late to help - he died soon afterwards. In the western world, people will barely believe such horror is even possible, but she deals with this kind of heartbreak routinely. We all find ourselves hoping we can meet them again soon and take them out sailing. At sunset, as Morgan and her children were preparing to return to the mainland, our volunteer crew member Dougal McEwan from Scotland unpacked his bagpipes and treated them to a world-class concert that left the strains of the pipes echoing from the surrounding hills, and we wave au revoir. Another lasting memory all of us.

We have met so many wonderful people in our travels, including people in Haiti who have helped us understand how to function in this country, an Australian lady, Alison Thompson, who became ambassador to Haiti's Ministry of the Environment and two young ladies helping to run a community center in Port-au-Prince near the UN compound, who have also learned Creole and seem to understand this strange country and its environs, serving multiple aid organizations with advice and accommodations. In comparison, we feel like interlopers with no right to be there, bumblers with no real understanding of the history of aid here and its failures, and hoping that we are not just another in a long stream of supporters who have simply come and gone.

So here we are, drifting in the sultry heat and mercury-reflective sea, wondering if we are helping? We decide we are. After all, in the last two weeks we've delivered 1000 cubic feet of recycled sails to subsistence fishermen for Sails For Sustenance, 50 cases of tools to Haiti Communitere and over 6 pallets of medical supplies to an orphanage and clinics. We've helped multiple charities get vital supplies that are very difficult to ship into Haiti. This isn't even our main mission - which is coastal disaster relief. But after the 2010 earthquake that killed nearly a quarter of a million people, Haiti is a continuing disaster, so while IRG is in operational standby in the Caribbean for emergencies, we'll continue to help for the foreseeable future - one boatload at a time.

Please help us to continue in this most impoverished country in the western world. Click here to make a donation.